As a golf professional working with very young students, I find that keeping the focus on positive feedback and PLAY games is a vital step in them becoming and staying interested in activities like golf. It’s also about sharing the creative golf lessons-learned with families so they can keep the same concepts reinforced and not convolute the information with adult-verbiage that differs from what was learned in kid-parlance. While adults tend to be results-oriented, young children are more process-oriented and are in-the-moment and about themselves.  Young children are NOT WIRED yet to handle adult-focus and future-based action preparation.  Understanding this in helping a child find and build an interest in golf is a big key in their Golf Happiness!

Here are some ideas for coaches and adult family members to use when supporting their young golfer: 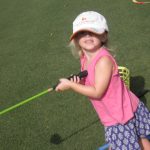 Support the child in however way he or she makes a golf stroke or activity in the CHILD’S style.

As an example, imagine a parent or coach watching a 3 year old ‘putting’ a ball towards/into a hole first with a reverse-handed grip, then a one-handed grip and finally picking up the ball, squatting next to the hole and dropping the ball into the hole, followed by the biggest smile with sparkly eyes from the accomplishment of ball-in-hole. They did it!  How many would tell the child that they did it incorrectly and immediately change them to a ‘perfect adult-grip’, place the feet ‘properly’ according to the adult and make the movement for/with the youngster in the adult swing motion?  I see it very often and have also been guilty of wanting to make changes as a golf professional.  What I equate that to is the following image: A child excitedly running up to a trusted adult for praise and review, waving a crayon drawing he or she just finished, and the adult looking at it and crumpling it up saying “You didn’t do this the right way, you have to do it THIS other way”.   Any attempt at moving a ball towards a target is the child’s work of art!  Allow this youngster room for creativity… they will eventually find methods that hold up as they age and mature.  Let’s not rush to have them to look like an adult’s perfect version of what is expected; compliment the child on his or her own style! 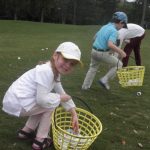 Human brains are wired for a 3:1 Negativity Bias and are wired to give priority to bad news for survival instinct. Not touching a hot stove or picking up a snake poised to strike are behaviors that are we have learned in order to survive as a species.  Based on this information, I would agree that most information I hear in the form of golf advice is in the negative form in which someone is doing something incorrectly.  As an example, many golfers are told they have to do it THIS way or they bent their lead arm, picked up their head and took their eye off the ball.  Most of the time those aren’t the root causes of an issue but just a symptom that is seen.  The point being is that golfers are often told about all the things that went wrong and that’s a lot to process if then trying to also figure out what is to be ‘right’ at the same time!   If I sent you to a grocery store with a list, would I stay focused on all the items I don’t need or just the ones I do need?  Stick to praising a young golfer for his or her efforts and creativity rather than constantly correcting their manner in which they choose to experiment with moving a ball to a target – it’s about the FUN way in which they PLAY golf.  Not even everyone on the professional Tours have what might be considered a perfect swing but they can get the ball to the hole with how they do it!